This post initially featured on our comprehensive analysis site, which covers players, matches and more from around the globe – totalfootballanalysis.com.

After the international break, the Premier League is back. On weekend Jürgen Klopp´s team faced Huddersfield with their German coach David Wagner. Liverpool tried to continue their unbeaten streak, but Klopp still decided to rotate and give some of his important players a break.

Huddersfield on the other side tried to finally get their first win. In an equal game, Liverpool struggled to create chances while Huddersfield was dangerous, but you could still observe their big problems in possession as well as defensively.

Against Huddersfield Liverpool played without Wijnaldum, Firmino, Keita and Mané in their starting eleven. Again, Daniel Sturridge started as the central striker and got supported by Mo Salah and Adam Lallana on the wings. New-signing Xherdan Shaqiri started alongside James Milner and Jordon Henderson in midfield.

As the clear favourite of that game, Liverpool tried to build-up from behind. However, they rarely managed to advance into Huddersfield´s half with a short-passes. The reason for that was Huddersfield´s man-marking. The man-marking created a game with a lot of 1v1 duels and rarely periods of stable possession for one team. The team of David Wagner successfully destroyed the rhythm of Liverpool´s build-up while they struggled to find a solution against that pressing.

Usually, Depoitre and Pritchard would man-mark the centre-backs while Mooy would push higher to man-mark Henderson. Building-up through the middle was therefore very hard for Liverpool because Huddersfield could immediately pressure the ball carrier. As a result, they often tried to play through the wings, but their fullbacks got also pressured by Huddersfield´s wingbacks. 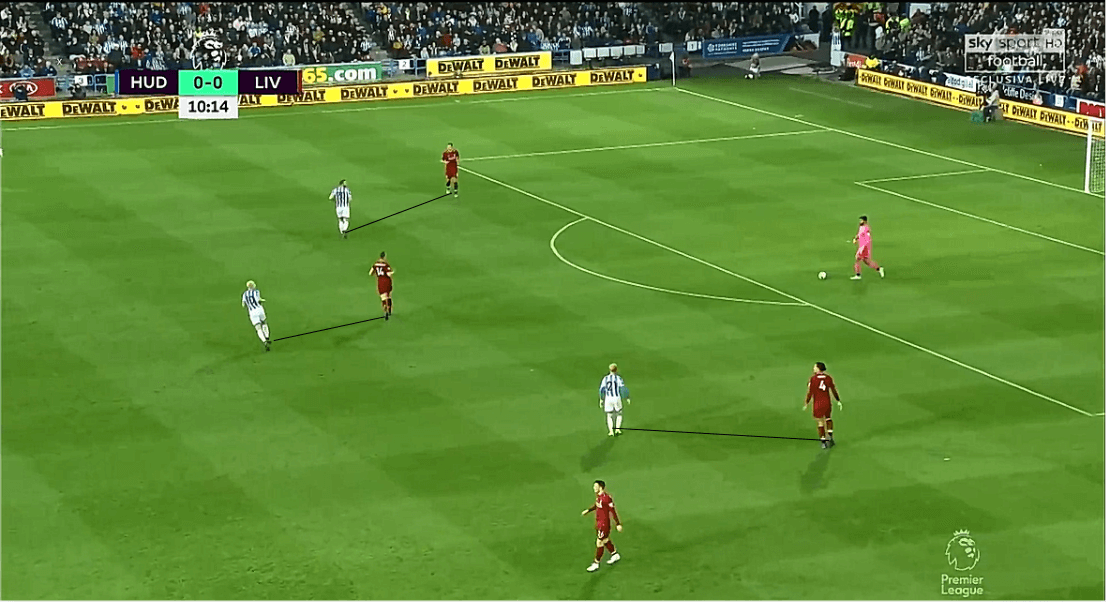 Especially, at the beginning of the game, Liverpool didn´t move a lot without the ball. To overcome an extremely man-oriented pressing body movement is more important than ball movement. For example, you can use a variety of vertical and diagonal movements to confuse the defenders and create moments in which the opponents have to switch. Because in the end, Huddersfield didn´t play a real man-marking pressing. They still tried to remain in their usual shape, but the focus was clearly on creating a lot of 1v1 duels and create a chaotic game.

In the second half, Liverpool was capable of using quick vertical passes with subsequently layoff passes. Therefore, they were able to overplay the first lines of Huddersfield. Of course, defending like this is extremely exhausting and when Huddersfield lost their energy they were sometimes too late to pressure the ball carrier and Liverpool could use those seconds of being unmarked.

As I mentioned Huddersfield played extremely man-oriented, but they lacked compactness between their midfield and defensive line. As a result, Liverpool tried to exploit those holes in the defence. One way of using the space between the lines was the usage of Alisson’s passing skills. The Brazilian keeper can play precise long balls. 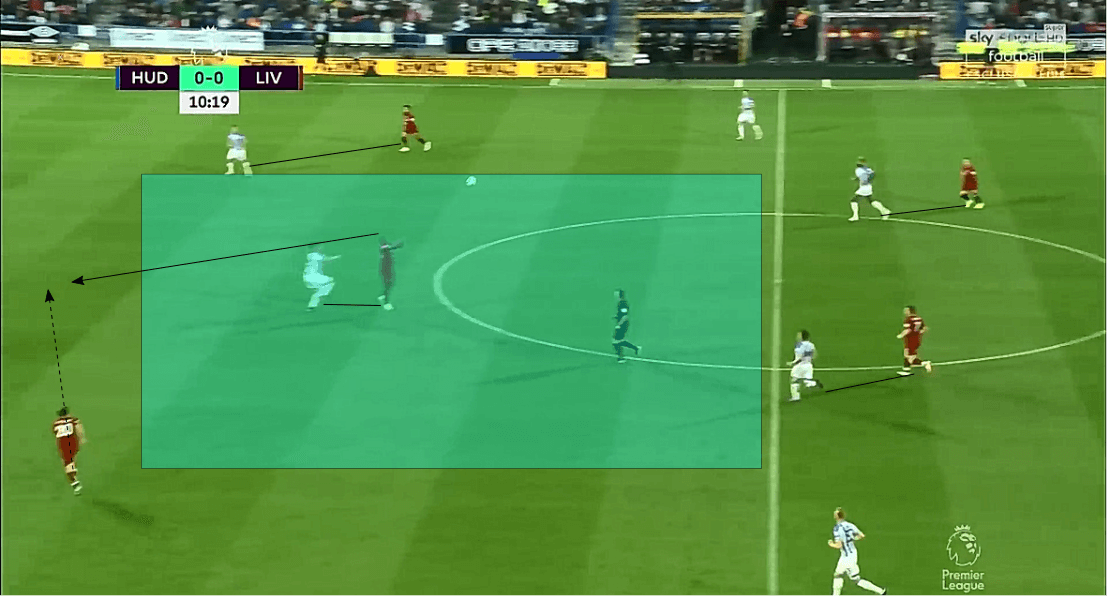 Liverpool´s midfielders moved relatively deep to support the build-up while the strikers started from a higher position which stretched Huddersfield´s defence vertically. One of the strikers could then drop and receive a long ball. Usually, Huddersfield´s centre-backs would follow Liverpool´s strikers but then they could exploit their advantages in terms of speed.

Furthermore, Liverpool tried to play passes between the lines to one of their strikers. Either he could play a layoff pass or Liverpool regained the ball with their strong counter-pressing. Huddersfield non-compact shape was easier to overplay when they used the layoff passes because the midfielders of Huddersfield were focused on their opponent and the ball simultaneously and therefore could only react to the movements of Liverpool´s midfielders who pushed forward after playing the pass.

Besides that, Huddersfield struggled to keep horizontal compactness. Sometimes the midfielders started to push out of the line because after switches no one pressured the ball carrier. However, due to the heavy relying on man-orientations, the pushing out of position wasn´t secured by the other midfielders. As a consequence, Liverpool found free players between the lines occasionally. Like before the only goal when Shaqiri received the ball completely free and the whole defence of Huddersfield collapsed. 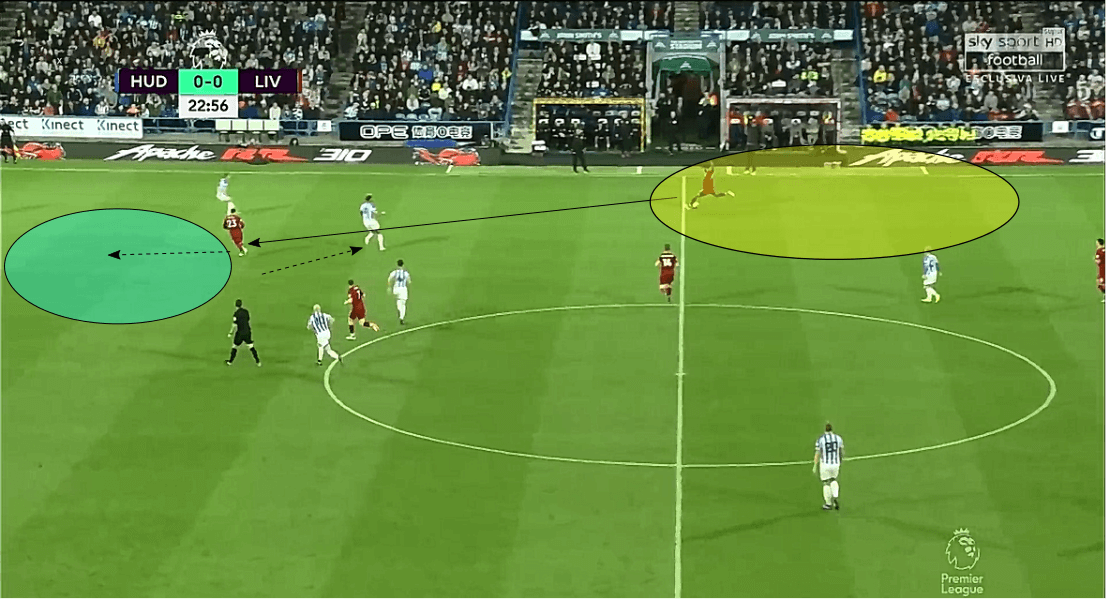 Furthermore, Huddersfield would sometimes switch from man-marking to double certain players. Especially, when Liverpool provoke pressure through certain passes, Huddersfield´s midfielders would leave their position in order to press. That opened space. Due to Liverpool´s semi-optimal structure, they could always take advantage of that. Here, Milner can easily play the ball to Henderson. 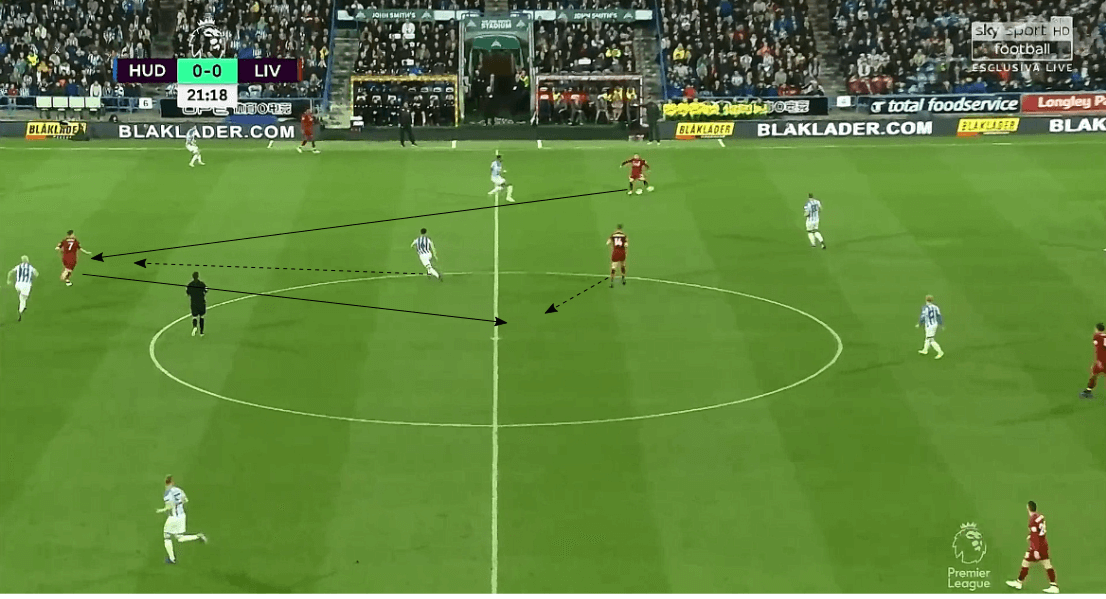 After the lead for Liverpool Huddersfield had more possession and Liverpool forced them to take action on their own. The goal of Liverpool was to take advantage of poor offensive play of Wagner´s team. Huddersfield usually attacked through the wings and was dangerous after crosses or quick combinations along the sideline.

An interesting aspect of Huddersfield´s build-up is the fact that their back-three positions extremely wide with the halfbacks at the sideline. Frequently, a central midfielder, either Billing or Hogg, would drop deeper and they build-up with a back-four. Against Liverpool, their positioning in the centre wasn´t good enough to play through that. But against Liverpool, you always have the risk of losing the ball in the centre. Huddersfield probably wanted to avoid that risk. 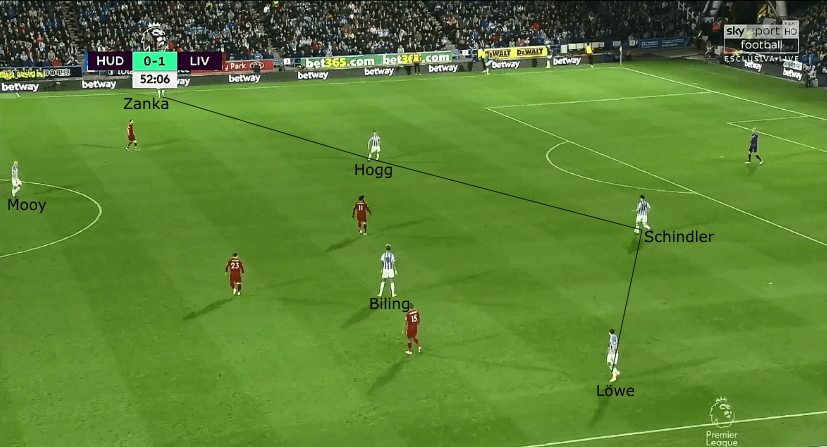 Due to their wide halfbacks, they occupied the wings with two players. One of the central midfielders and Alex Pritchard joined and supported the attack on the wing. Sometimes, Huddersfield was capable of playing through Liverpool´s defensive shape when their counter-pressing failed. But most of the time Huddersfield was dangerous after crosses or set pieces.

It was probably one of the more boring games in the Premier League this weekend. Liverpool struggled in possession without a few key players but still managed to get the win because of their effectiveness. For the future, Jürgen Klopp has to think about the role of Xherdan Shaqiri. The Swiss didn´t look that good as central midfielders. His positioning was always perfect neither his decision making especially in deeper zones. As an attacker, he could be more valuable.

For Huddersfield, the streak without a win continues. The team offered a good fight but wasn´t good enough defensively or offensively to really challenge Liverpool. If the team of David Wagner do not improve quickly they will struggle to stay in the Premier League this season.

Sarri’s right, Liverpool are ‘one year’ ahead of Chelsea and here’s...

A New Addition to the Betiton Team: Djibril Cissé

Can Liverpool Women kickstart their season against West Ham?