This tactical analysis of Liverpool vs PSG first appeared on totalfootballanalysis.com

There is always a sense that when the Champions League group stages get underway that the season is finally properly underway. The opening matches of the domestic season are over and the first international break of the year has come and gone but now football feels as though it has really started. Indeed this is even more so the case given that one of the first rounds of fixtures would see PSG of France travel to England to face Liverpool. A match that would see two German coaches come face to face with Thomas Tuchel having taken charge of PSG at the start of the season and Jurgen Klopp being well established as the Liverpool coach.

The narrative did not stop there with Tuchel having followed Klopp as the coach both at FSV Mainz and at Borussia Dortmund. Whilst they are known to get on well their footballing philosophies vary with Klopp preferring to play the game via a series of quick transitions whilst Tuchel prefers positional play in the style of Pep Guardiola.

The prior relationship between the two coaches and the contrast in footballing style and philosophy promised to create an interesting spectacle.

In the end, Liverpool will perhaps feel hard done to having ‘only’ won the match 3-2, with the winner coming via Roberto Firmino in stoppage time. In truth, PSG struggled to find their attacking rhythm and despite goals from Thomas Meunier and Kylian Mbappe they rarely looked like threatening the Liverpool defence. Whilst the xG score from the match came out at 1.88 to 1.17 in Liverpool’s favour there was still a sense that the home side were more wasteful with their chances. 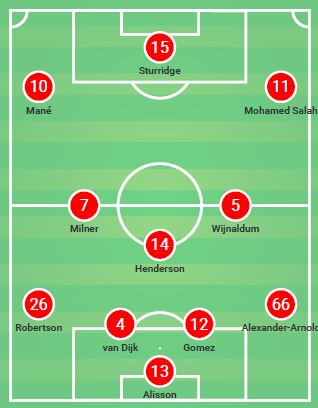 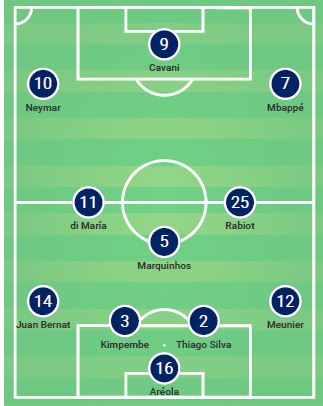 Both sides started the match in a 4-3-3 structure although through roles and responsibilities the way that the players behaved and moved within these structures varied.

The biggest surprise for Liverpool saw Klopp decide to leave out the Guinea international midfielder Naby Keita as he preferred to bring Jordan Henderson back into the ‘6’ role with Giorginio Wijnaldum pushing into a more advanced position. Other than and the introduction of Daniel Sturridge at centre-forward to replace Roberto Firmino who was not fit to start the match. Joe Gomez continued to partner Virgil Van Dijk in the centre of the defence.

For PSG there is a real issue in the central midfield position. The decision to use Marquinhos, possibly PSG’s best central defender as the ‘6’ at the base of the midfield had repercussions further back and with Angel Di Maria playing as the ‘8’ alongside Adrian Rabiot PSG were left with Rabiot as the only natural central midfielder as part of their three.

Throughout his coaching career and especially whilst at Mainz, Thomas Tuchel has been well known for his preference for his teams to vary their defensive block not only from game to game but sometimes throughout a game. Whilst most coaches prefer to use a single block, a high block from Klopp at Liverpool, a medium block from Jose Mourinho at Manchester United or a low block from Tony Pullis wherever he coaches, Tuchel prefers his sides to adapt to the rhythm of the game.

In this match, there was a clear preference from PSG to play with a medium block with Tuchel keen to have his squad able to play in and out of this block in transition.

What we saw, however, was a clear split in the defensive structure with PSG as 8 players were involved in the defensive phase and 3 stayed high and simply waited for the ball to be played forwards. This split in effect neutralised the effectiveness of the PSG defensive block and allowed Liverpool the time and space to easily overload the PSG defence on either side. 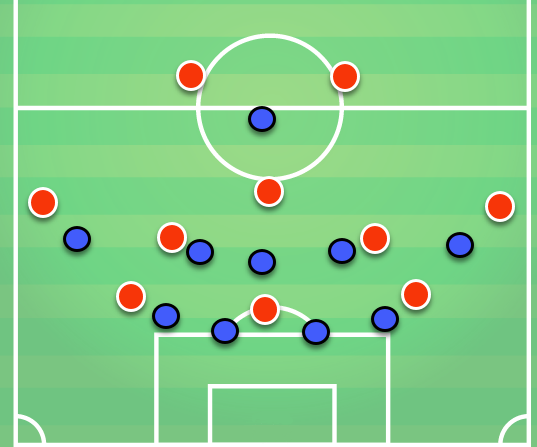 Here is an example of how the defensive structure from PSG should have worked. With the back four becoming narrow in the defensive phase they should have three central midfielders organised in the middle to deny easy access to passing lanes while the two wide forwards dropped back to cover the threat of the Liverpool fullbacks. 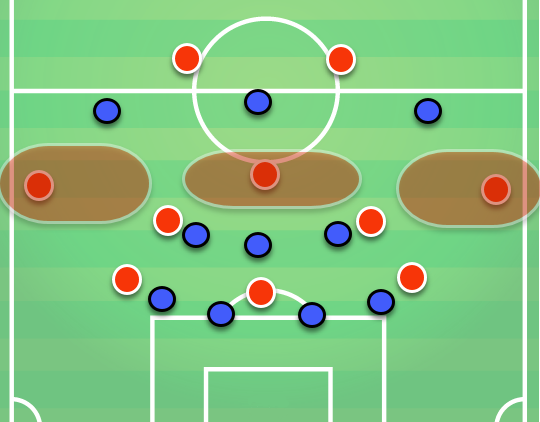 What we actually saw from PSG was the above. While the centre of the defensive structure was compact and relatively strong there was no cover on the outside and as such, we saw Trent Alexander-Arnold and Andrew Robertson enjoy space in the wide areas whenever Liverpool were in the attacking phase. The same can be said of Jordan Henderson at the base of the midfield who tended to be free to collect and recycle possession when Liverpool looked to change the angle and the pace of the attack. 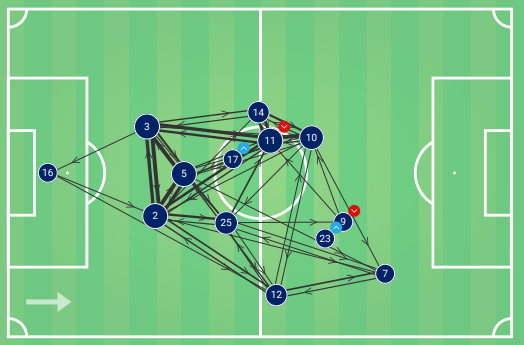 The pass map in the match for PSG is instructive, look at the high positioning of Mbappe(7) on the right side for the French side with Neymar(10) and the left-back Juan Bernat(14) narrow on the left side. These positional tendencies opened up space that Liverpool were able to exploit almost at will. 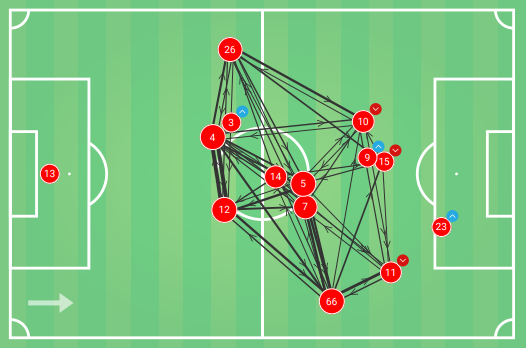 Now compare that with the pass map for Liverpool and, in particular, the positioning of Alexander Arnold(66) high on the right side of the field where he was able to connect easily with Mohamed Salah(11) on that side. 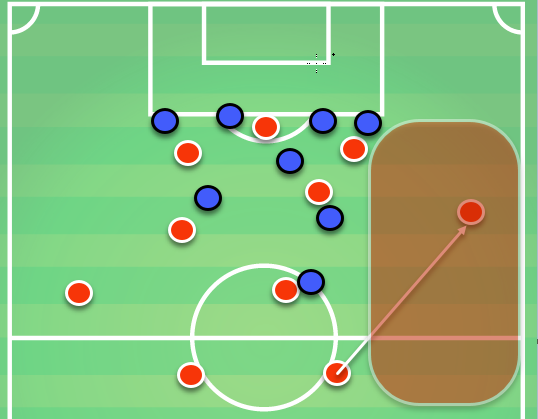 As you can see the PSG defensive block displayed a clear tendency to drop back into deeper central positions. As they did so they left space in the wide areas that could be easily exploited by Alexander-Arnold on the right and Robertson on the left. As the ball is switched out wide by Gomez to Alexander-Arnold the young England right-back has the time and space to advance forward into the final third. 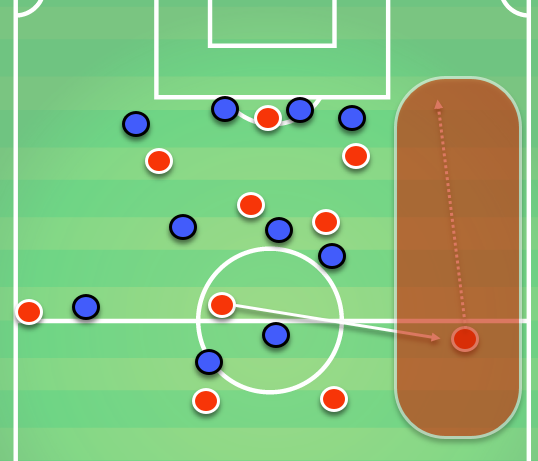 Here again, we see the space that Trent Alexander-Arnold had when advancing down the right side. Jordan Henderson is able to collect possession centrally before then opening up his body and playing the ball out into the wide area. Once more when Alexander-Arnold gets possession he is able to drive forwards in to the final third.

The passing stats from the match also point at an impressive match for Trent Alexander-Arnold. He completed 76% of his forward passes 84% of his progressive passes and 67% of his passes into the final third. All of these combine to show that Alexander-Arnold was the primary playmaker for Liverpool over the course of this match. He took clear advantage of the spaces that were given to him throughout the match.

When reflecting back on the match I think it is important that we keep in mind just how difficult it is for teams to come to Anfield at the moment. Confidence at Liverpool is high and they are playing at a very high level. With that said however the performances from the PSG forwards left a lot to be desired.

The key stats ahead of Liverpool v Leicester

Life after Fabinho did not change for Liverpool

A New Addition to the Betiton Team: Djibril Cissé