This article originally featured on totalfootballanalysis.com, our flagship analysis site covering matches, players and managers from around the globe.

Two teams in two different spots in the Premier League table squared off on Boxing Day. Liverpool have been in top form the last five matches, while Newcastle had been inconsistent. In this article, we will analyse the contrasting tactical setups between Klopp and Benitez, in particular how Klopp attacks Benitez’s defensively disciplined setup.

Klopp will employ his distinct Gegenpress. One has to remember this pressing system by Klopp causes his formation to be fluid rather than static, with the focus being on immediately winning the ball back after it is lost which is why they maintain so much possession in their opponents attacking third. This will allow Liverpool to maintain a lethal offensive attack, utilizing interchanges and creativity when regaining possession.

Benitez, a defensive tactician, will focus on pressing in a low-block against Klopp, with two Pivots sitting in front of the back four (sometimes a back five) to close down opportunities for Liverpool and to maintain possession. As you can see below from their game vs Chelsea in August they will even drop their attacking midfielder to create a flat five in midfield and shutdown possible penetration within the penalty box as Liverpool have only scored four goals from outside the box.

Liverpool will set up as in a 4-2-3-1, but will allow their attacking players a lot of freedom in possession. This especially evident with the inclusion of Shaqiri in the starting lineup and Firmino sitting in front of Henderson and Wijnaidum. This setup will allow for a lot of interchanging between Liverpool’s attacking players, especially with Salah stretching the Magpies’ defence. Of Liverpool’s 37 goals, 33 have been in the penalty area or six-yard box. Benitez knows this well and will try to force Liverpool to try and score from the outside to defeat his low block. Notice below how Liverpool attacked Wolves’ low block on Mo Salah’s first goal. The buildup starts with Liverpool switching the point of attack and Fabinho joining the attack.

This type of movement on and off the ball will be required for Liverpool to break down the Magpies’ organized defence, but will also leave them susceptible to counters when their outside backs join in the attack. 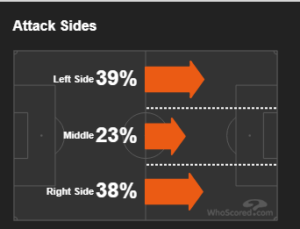 Benitez will set up in a 3-5-2. Defensively it will look much more like a 5-3-2 and they will look to attack via a counter to expose space left behind the Liverpool fullbacks. This will also require hold up play from Joseulo. This will allow its wingers to get in the attack and players like Yedlin and Richie to join in the attack for early crosses to create chances.

The first half of this game was characterised by Liverpool’s relentless press and Newcastle’s cautious approach. Despite Liverpool’s early lead and domination of possession, Benitez did not have to alter his original game plan of trying to disrupt Liverpool’s attack.

On the other hand, Klopp could be pleased that the half could be characterised by limiting any meaningful possession for the Magpies through relentless pressure in the middle and offensive third. Liverpool were able to break through the Magpies’ pressure by scoring from a quick corner. Despite being limited offensively, Benitez’s squad was able to produce some positive sequences, mostly from quick crosses on the outside. If Newcastle were able to convert one of these chances it may have changed the course of this game.

Second Half: The Game Breaks Open

The second half can be characterised by Liverpool breaking down the low block in a different way effectively. Mo Salah doubled Liverpool’s lead with an early penalty, in what one could consider a questionable call. Nonetheless, Benitez did not adjust his formation or tactics even when the scoreline required him to do so. Below is the defensive set up by Benitez’s setup in the 52nd and 69th minute.

While Benitez opted to stay with a cautious setup, Klopp continued to have his team press high without the ball and continue to break down the Magpies’ low block in different fashions: combination play, purposeful direct balls behind the defence (whether switching the field or diagonal runs behind) and another set piece goal.

As was evident throughout much of the first half, Liverpool applied high pressure on the Magpies back line and made it difficult for them to sustain possession or even relieve the offensive pressure that Liverpool was sustaining in the offensive third. Below you will see the attempted clearance by the Magpies after sustaining pressure and Virgil Van Dijk stepping to the ball leading to another great Liverpool opportunity.

Liverpool controlled the possession of the first half and were very successful switching the point of attack while the Magpies tried to relieve pressure and produce a counter attack. They were also able to close down Newcastle as they tried to sustain possession for many periods of his first half

As shown above – Liverpool’s high pressure was extremely disciplined, leaving Newcastle to have to settle for long balls that could be easily anticipated by their defenders. While Klopp’s Gegenpress requires an extremely high work rate and endurance, it is equally, if not more taxing on his opponents. The above press was established early in the first half, and as you can see below was equally as taxing during the second half.

Facing a low block pressing system is nothing new for Klopp and this match was no different. Throughout the first half, Liverpool were able to show signs of finding gaps in Benitez’s setup through quick combination play and switching the point of attack directly. Throughout the game, Liverpool’s attacking players interchanged and created overloads on the outside of the pitch. In the first half, this led to a missed chance for Shaqiri, but a conversion in the second half. These are the same attacking principles that lead to Mo Salah’s first goal in their last game vs Wolverhampton.

In the second half, this same principle was at the core of their third goal after a switch of play. Henderson played a ball through Alexander who led in Shaqiri for an easy tap in.

The Impact of Mo

While Mohammad Salah is known for his finishing touch around the box, and rightfully so, the impact he has on stretching the defence was on full display today vs the Magpies. Klopp opted for an extremely offensive formation with the inclusion of Shaqiri, Mané, and Firmino in the starting lineup. All were able to operate at an extremely high level because of the off-the-ball movement by Mo Salah. Salah’s runs in behind the defence provided his team an outlet to spread out the Magpies. Liverpool’s second goal can be attributed to his ability to stretch the defence as without it Liverpool may have been forced to be much more predictable.

One ball was able to beat eight Magpies and send the target forward in a 1v1 situation that led to a PK- all because of the timing of his run and the ability to consistently stretch the defence.

Set Pieces: From start to finish

For all Liverpool did well in the run of play, set pieces are what started and ended the match in two different varieties. What we are going to focus on is the opening goal which was a quick corner before the defence could get set up. This was evident as it set up a poor clearance by Newcastle that led to a volley by Lovren. As you can see in the diagram to the right- this rushed defence left him completely unmarked to set up such a great opportunity.

⦁ Even taking into account the talent gap between the two teams, Newcastle’s setup did not impede Liverpool’s attack to any great extent or for any real period of time. Klopp’s team was able to control the run of play- dominating possession and chances. 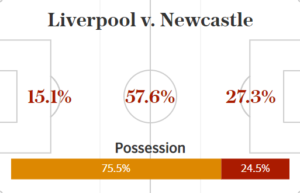 ⦁ The Magpies weren’t able to really sustain any significant pressure in Liverpool’s offensive third and despite Benitez’s squad being known for their defensive discipline- spending roughly 75% of the game defending is a recipe for failure.

⦁ This 2018 Liverpool team defines Klopp’s Gegenpress – quickly putting teams under extreme pressure and forcing turnovers to create offence. As shown above, this was put on full display with Newcastle unable to sustain any long period of possession shown below. Newcastle was only able to complete 247 passes and 0 through balls which leaves one to believe there were not many opportunities for significant buildup play.

If you love tactical analysis, then you’ll love the digital magazines from totalfootballanalysis.com – a guaranteed 100+ pages of pure tactical analysis covering topics from the Premier League, Serie A, La Liga, Bundesliga and many, many more. Get your copy of the FIRST of two December issues for just £4.99 here or preorder the SECOND of the December issues with an annual membership right here.

Why I No Longer Hate Gini Wijnaldum

Keyboard warriors’ criticism of Karius has crossed a tasteless line