The stakes couldn’t have been higher as Liverpool hosted Wolves in the last week of the 2018/19 Premier League Season. Jürgen Klopp and his team needed a result if they had any chance of winning the Premier League. With seventh place already secured, Wolves had nothing to play for but pride. Wolves did well, threatening Liverpool throughout the match, but it was the Merseyside team who came out on top. This tactical analysis will highlight the key areas of the match that contributed to the result. 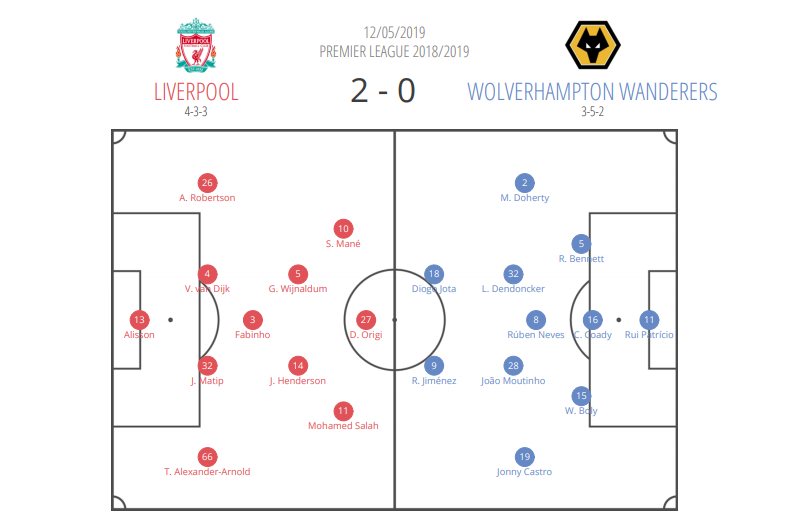 With everything still to play for, Jürgen Klopp needed to pick his strongest team possible if he wanted to beat a stubborn Wolves. Firmino’s injury meant he was still unavailable, but Salah was ready to return to the lineup after receiving a head injury against Newcastle. After an impressive win against Barcelona, Klopp understandably didn’t want to change much, but that didn’t stop him from making changes. Shaqiri was dropped in favour of a fit Salah, while Georginio Wijnaldum came back into the midfield ahead of James Milner.

Nuno Santo didn’t make any changes after his team’s win over Fulham. The team lined up in a 3-5-2 formation, with Matt Doherty and Jonny playing as attacking wingbacks.

If you want to read the whole tactical breakdown of the game, head over to totalfootballanalysis.com or click HERE

Can Liverpool cope with pre-Christmas schedule of 8 games in 28...

Xherdan Shaqiri vs. Huddersfield: Putting a Player in a Position to...

On The Left Side: Courtois goes shopping, transfer deadline day and...