This article originally featured over on totalfootballanalysis.com, our flagship analysis site covering managers, players and matches from all over the globe.

It was the big game in this round of the Champions League. Two former BVB coaches fought with their teams for important points in the run for the qualification for the next round. After Liverpool lost against Belgrade on the last matchday. The fight for the two spots in the next round was completely open again. Napoli did their duties and could secure a win against the Serbian team from Belgrade. For PSG this game was more or less and win or go home game. This was the same case for coach Thomas Tuchel who would have had a hard time in Paris if his team would have lost that game. Jürgen Klopp and his Liverpool side, on the other hand, wanted to secure their good position in the group.

The game was an intense and tactically interesting duel won which, in the end, was won by the superior team, PSG. Especially, in the first half, the team from France’s capital were the more dangerous and active team. Due to Tuchel’s intelligent game plan they were able to find a way through Liverpool’s pressing again and again. The consequence, multiple good chances and two goals scored by Bernat and Neymar.

Liverpool, on the other hand, struggled to create anything in possession due to their structural problems. Usually, they can rely on their good pressing and counter-pressing due to which they often create chances even if their structure in possession is far from optimal. However, Jürgen Klopp’s side struggled to close PSG’s passing options. Even if they won the ball in midfield, Paris were often well-structured and could defend most of the counterattacks.

Tuchel had a plan, to give PSG an edge over Liverpool

Normally, teams who concentrate heavily on possession and positional play have a hard time against Klopp’s teams due to their aggressive pressing which often breaks the rhythm of the team in possession. Paris St. Germain, for example, struggled to build-up from behind in the first match against Liverpool this season. At Anfield, Liverpool dominated and PSG struggled with the newly implemented principles of positional play.

A few months later, the players accustomed to the principles of Thomas Tuchel’s philosophy while the German coach seemed to find his preferred line-up. Still, against Liverpool, they played arguably their best match under Thomas Tuchel and were impressive in the way they played through Klopp’s press.

The main goal of PSG was to overplay the first line of pressure in order to pass the ball to Verratti. Due to the positioning of the other players, the Italian midfielder would be the free man and could, therefore, initiate the attacking play of PSG.

In the build-up, the French champions used a back-three with Marquinhos as the central defender. The Brazilian had a hybrid role because against the ball he defended next to Verratti. Kimpembe and Thiago Silva played as halfbacks. Together with Verratti, they formed a diamond to maximize the amount of space Liverpool’s strikers had to cover. Because Salah, Firmino and Mané pressed the back-three aggressively and tried to deny passes in the centre. 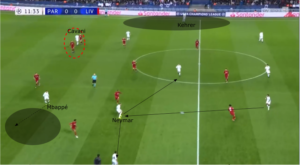 However, PSG moved the ball well in their first line. Often attracting opponents and then switching to find Verratti behind the lines. The Italian midfielder could often receive the ball and even when Liverpool were able to pressure him, his dribbling skills allowed him to get out of those situations. Most of the time he found enough space to dribble towards Liverpool’s half. The three central midfielders Klopp selected were Henderson, Milner and Wijnaldum. All three struggled to press Verratti. In the beginning, Henderson was often the guy moving out of the line however, this was an advantage for PSG due to Verratti’s quickness.

Most of the time Liverpool’s central midfielders, however, weren’t able to press Verratti due to the positioning of PSG midfielders and strikers. Neymar and Di María both positioned in the halfspace. Consequently, Milner and Wijnaldum couldn’t step up to press Verratti. By moving higher and then dropping deeper occasionally Neymar and Di María supported the build-up but simultaneously created space for their defensive midfielder. The only player left was Henderson who as I already mentioned isn’t the player who can press Verratti. Sometimes Mbappé would even drop when Henderson pressed higher using the open space which could get dangerous for Liverpool when they overcame the first line of LFC plus Henderson.

Not only centrally, but also on the wings, PSG could find an open player. Usually, the fullbacks of Liverpool pressed Paris’ wingbacks. On the left side, Juan Bernat got pressured regularly because he is one of the more dangerous attacking wingbacks. On the other side, Thilo Kehrer got more space. Under Klopp, the wingers press the halfback/centre-backs while the fullbacks cover the sideline. However, due to the clever positioning of Cavani and Mbappé between fullback and centre-back of Liverpool the defenders weren’t able to move out to press all the time. Paris St. Germain successfully created superiorities and free men in different spaces on the pitch.

When they played through the first line of pressure PSG increased their speed and attacked more directly. Neymar, Mbappé or Di María were often close together to combine in tight spaces which were successful due to the high quality of those players. Liverpool struggled to defend that because especially Neymar quite often dribbled into the space between the lines. The runs of Cavani and Mbappé were perfect because one of them moved into a wider position. This stretched Liverpool’s defence but also made it hard for them to effectively press the wider players. Their most dangerous chances resulted out of a flat cross from Mbappé.

Liverpool, on the other hand, really struggled to create dangerous chances. Except for their penalty they could rarely create anything. Buffon actually had a quiet evening in goal. Part of that was due to the problems in possession which Liverpool had. Until the first goal, PSG pressed more aggressively in a 4-4-2 in which Marquinhos played next to Verratti. After the first goal, they gave Liverpool the ball. 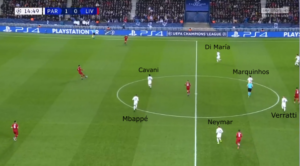 However, Jürgen Klopp’s side wasn’t well-structured. The distances were too big, and they rarely found passing lanes in the centre. Kehrer and Silva defended Mané well while Salah and Firmino also got pressed immediately after receiving the ball. After Robertson on the left side moved higher Liverpool started to get more dangerous. Because either the right winger of Paris followed him which created an advantage for Liverpool in the centre or Robertson was three on the left side and Kehrer had to defend him and Mané.

In the end, Liverpool were still not really capable of using this advantage and Paris focused more on counter-attacks in the second half. This made it extremely hard for Liverpool because you could see that they were missing the necessary mechanisms to break through the well-structured and passionate defending defence of PSG.

Thomas Tuchel was clever enough to focus on staying compact and using the space Liverpool left because their counter-pressing wasn´t really good that they. Likely for Liverpool, PSG wasn’t good at finishing those attacks. After Mbappé and Cavani got replaced by Dani Alves and Choupo-Moting PSG just lacked the quality up-front. For the last minutes, PSG defended in a 5-4-1 only to secure the win in the end. Against a poor-performing Liverpool that was enough for PSG and head coach Thomas Tuchel.

Especially, in the first half, it was a really interesting game with PSG being the stronger team. Their adjustments in the build-up were perfect and they circulated the ball on a high level.

In the first half, Thomas Tuchel was clearly winning the coaching duel against Jürgen Klopp. His team was capable of creating all kinds of superiorities and using them to create good chances. The second half was even, and Liverpool tried to create more offensively. Due to the fact that Klopp´s team performed poor on that evening, PSG was the well-deserved winner. The win gives PSG a good position for the last game while Liverpool has to beat Napoli at home.

If you love tactical analysis, then you’ll love the new magazine from totalfootballanalysis.com – 118 pages of pure tactical analysis covering topics from the Premier League, Serie A, La Liga, Bundesliga and many, many more. Get your copy today for just £4.99 here!

Tactical Analysis: Liverpool overcome Spurs at Wembley, but how?

Another Origi: Klopp should not sign 21 y/o Ligue 1 star

Premier League week 38 preview: Can Liverpool finally make sure of...