In August 2017, Liverpool F.C agreed to the transfer of Naby Keita from RB Leipzig. At the time, RB Leipzig had just qualified for the Champions League after finishing in 2nd place in the Bundesliga. Naby Keita had scored 8 goals in 31 league appearances and contributed 6 assists.

Naby Keita first got his break in French football playing in Ligue 2 for Nimes Olympique, scoring 11 goals in 23 games. His performances earned him a move to RB Salzburg where in his second season he was named Austrian Bundesliga Player of the Year. Then, as typical with the Red Bull franchise, he moved to the ‘premier’ club RB Leipzig in the German Bundesliga.

He has a reputation as a box-to-box midfielder but what will he bring to Jurgen Klopp‘s Liverpool?

The game that represented Naby Keita 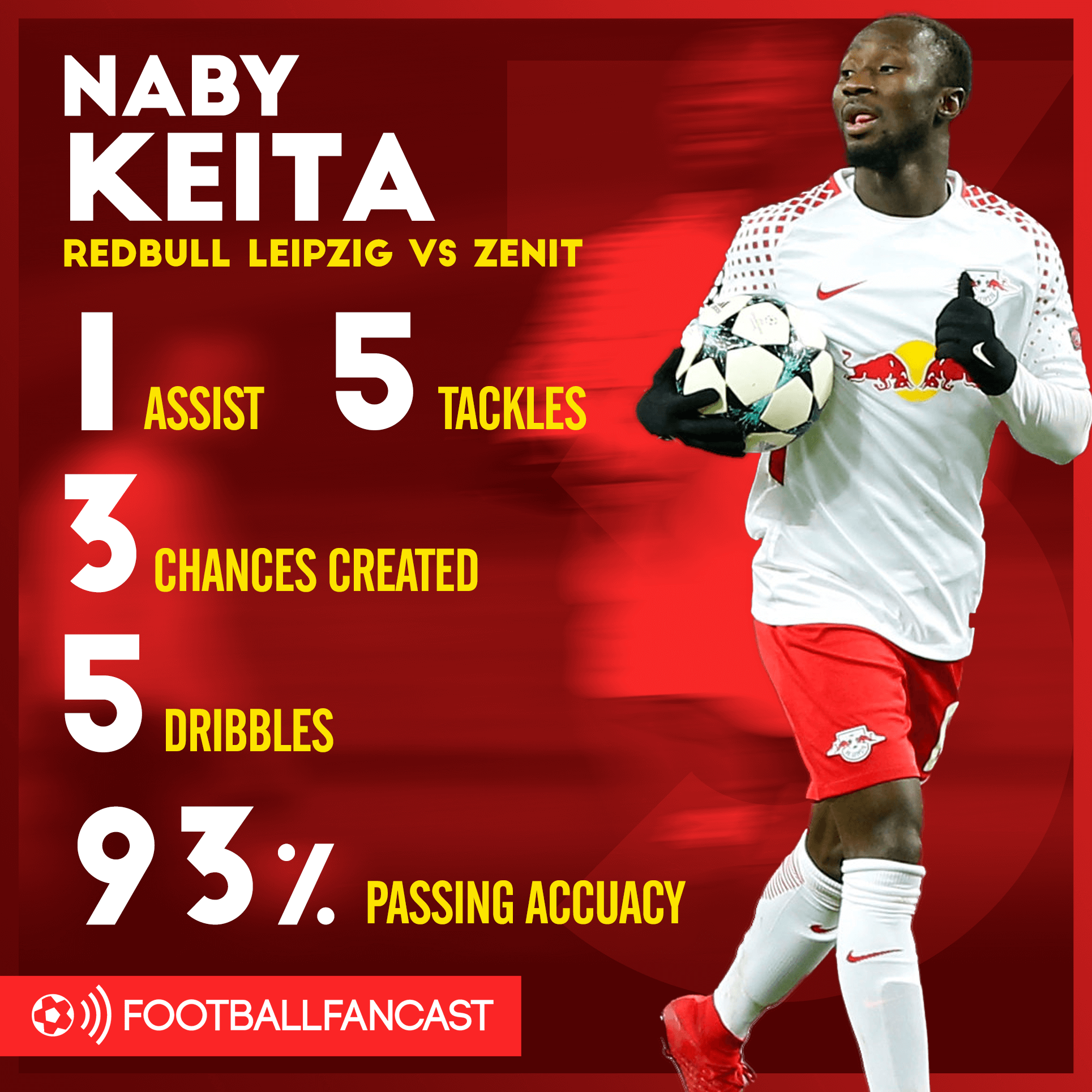 If there ever was a game that represented Naby Keita’s strengths it was the RB Leipzig last-16 Europa League tie vs Zenit St Petersburg. In this game, he showcased his strengths which will enable him to flourish at Liverpool.

This game signalled that he wasn’t just a combative midfielder. Naby Keita also provided an attacking edge, he provided 1 assist, created 3 chances and undertook 5 dribbles to dominate the midfield. His passing accuracy was 93%, which will be crucial to Jurgen Klopp controlling games in the Premier League. Furthermore, Naby Keita made 5 tackles which will fit perfect into Jurgen Klopp’s pressing style.

Where do Liverpool need to improve?

Firstly, let’s focus on what Liverpool were missing last season. They finished 25 points behind the champions Manchester City and 6 points behind second place Manchester United. They finished 2nd on goals scored with 84, still a cool 22 goals behind Manchester City, and finished 4th on goals conceded with 38, level on goals with Chelsea. At a high level, Liverpool need to reduce the number of goals conceded. This doesn’t necessarily mean improving the defence, their ability to control games will be paramount to ensuring that their point tally improves.

Furthermore, if we look at the Champions League final against Real Madrid, it shows Liverpool’s lack of control throughout the game. Whilst they were on par with Real Madrid in terms of shots with 13 compared to their 14, possession statistics were far lower with only 35%. This is crucial at the elite level as controlling possession reduces the number of chances for the opposition, it puts you on the front foot when defending. This points to yet another reason as to why Naby Keita will be crucial to Liverpool’s development this season.

How will Naby Keita impact Liverpool? 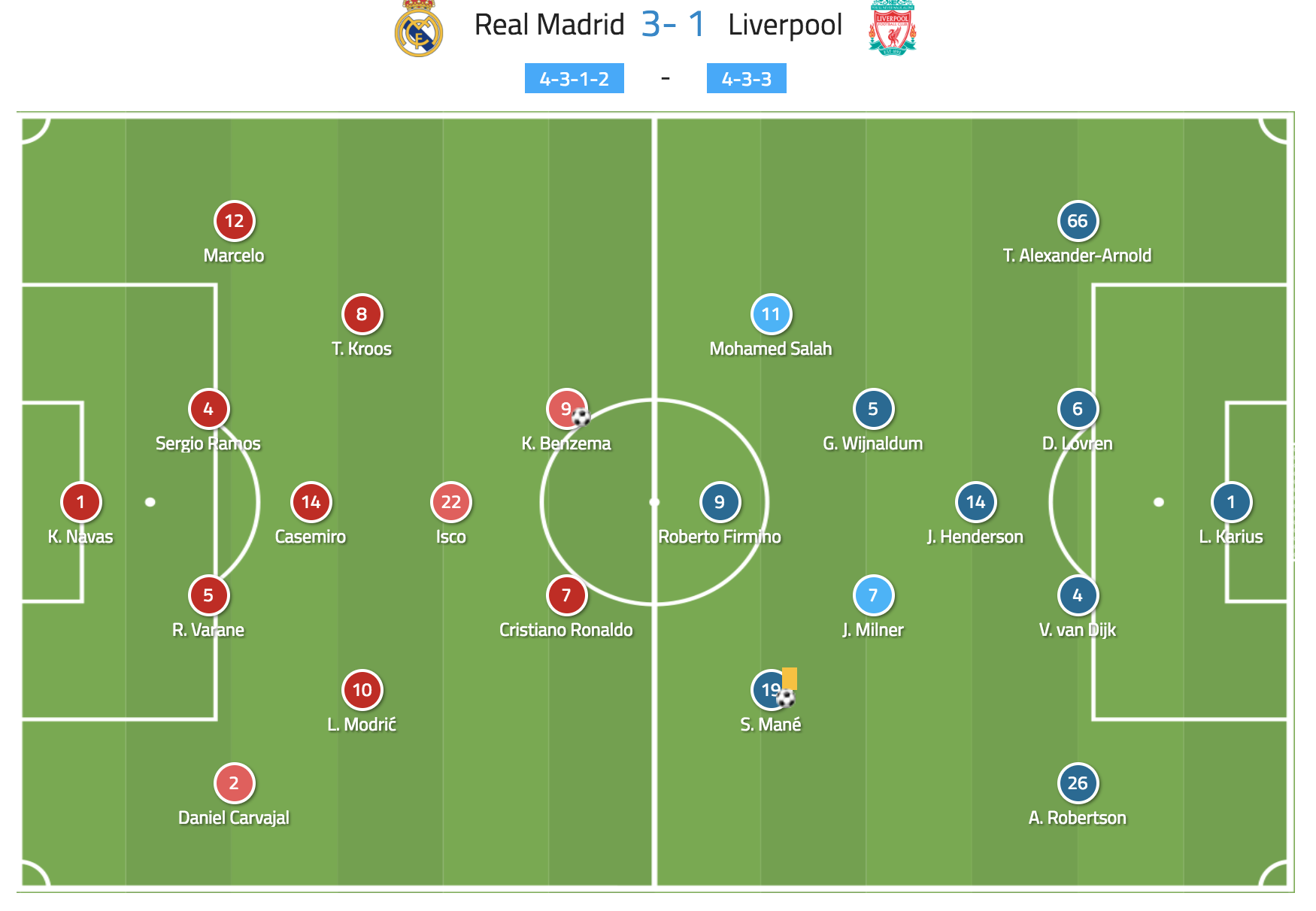 If we use the Champions League final lineup to understand where Naby Keita will fit into the team, there is one of three positions. If we assume that club captain Jordan Henderson plays in the same holding role for England as he did at the World Cup, there Naby Keita will be competing with new signing Fabinho, James Milner and Gigi Wijnaldum for the other midfield berths.

With 5 Bundesliga goals last season and 8 the previous one, he offers Liverpool that extra support for their front three of Roberto Firmino, Saido Mane and Mohamed Salah. It is likely that Keita will be given freedom to roam with Fabinho and Jordan Henderson providing the discipline and keeping the team’s shape. 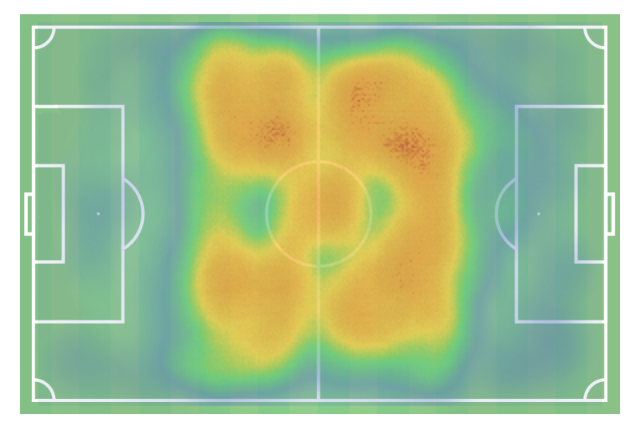 Above is the heatmap for Naby Keita throughout his career. His heatmap epitomises a box to box midfielder and his ability to get up and down could make the difference. Jurgen Klopp will get to play his preferred 4-3-3 and Naby Keita will have the freedom to join attacks, which he wouldn’t if there was a number 10 in front of him in a 4-2-3-1.

Gegenpressing: How will Naby Keita fit in?

Whilst some extra goals would help Liverpool hunt down the two Manchester clubs, Naby Keita will also add another dimension to Jurgen Klopp’s gegenpressing. Under Jurgen Klopp’s philosophy, he looks to implement an aggressive press as soon as the ball has been lost. This is because his belief is that the opposition is most vulnerable after just winning the ball while they try to bring it under control.

This style of play definitely suits Naby Keita. Last season, he won 47% of his duals in central midfield and made an average of 5 interceptions per game. The front trio at Liverpool will be expected to lead the press but Naby Keita will trigger the second wave from midfield, as he bridges the gap between the midfield and attack.

There have been early signs of this playing philosophy in pre-season friendlies. In particular, against Blackburn Rovers. The graphic below, shows his aggressive pressing winning the ball back high in the opposition’s half. 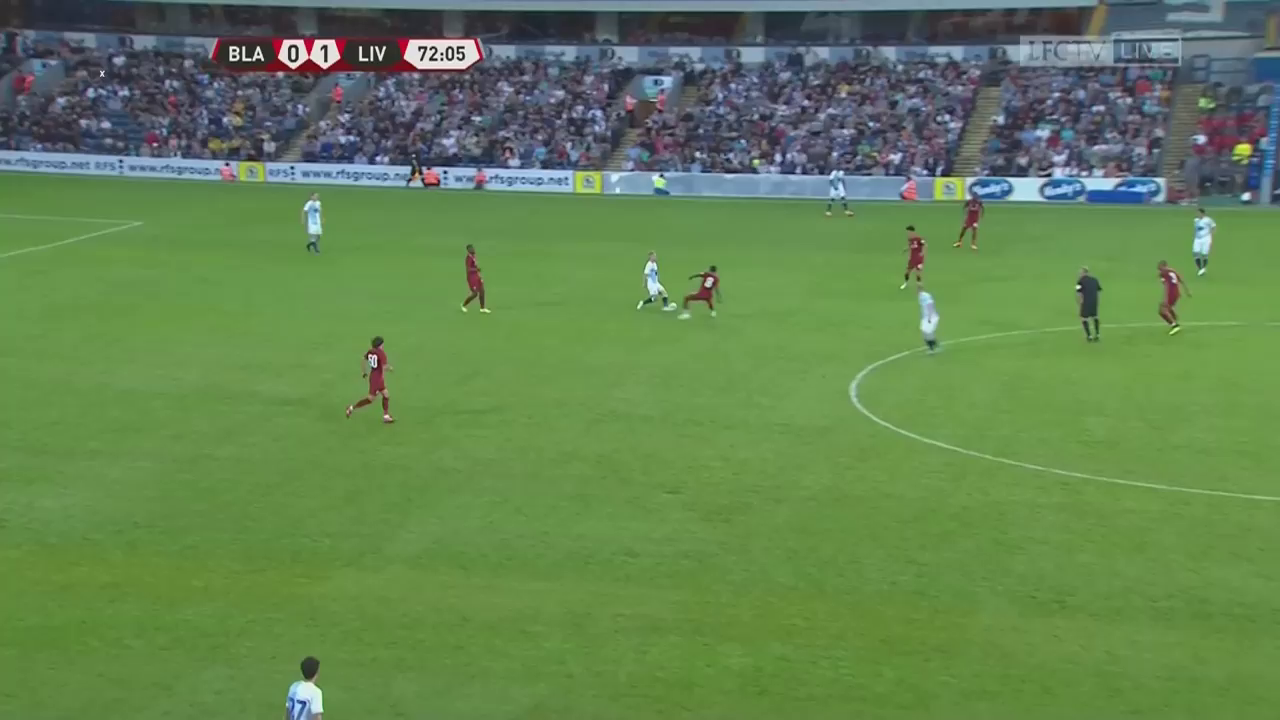 Aggressively closing down Blackburn’s holding midfielder has put their whole back four under pressure, who were currently high and wide looking to control possession. As soon as the ball is won back, Naby Keita is able to drive forward and thread a threw ball resulting in an empathetic finish to increase their lead. As we can see below, pressing high has resulted in Blackburn’s defence losing their protective midfield shield and winning the ball so high has allowed Naby Keita to run straight at their defence. With their defence out of shape, he has also had the intelligence to pick out a forward with a precise through ball to then, extend Liverpool’s lead. 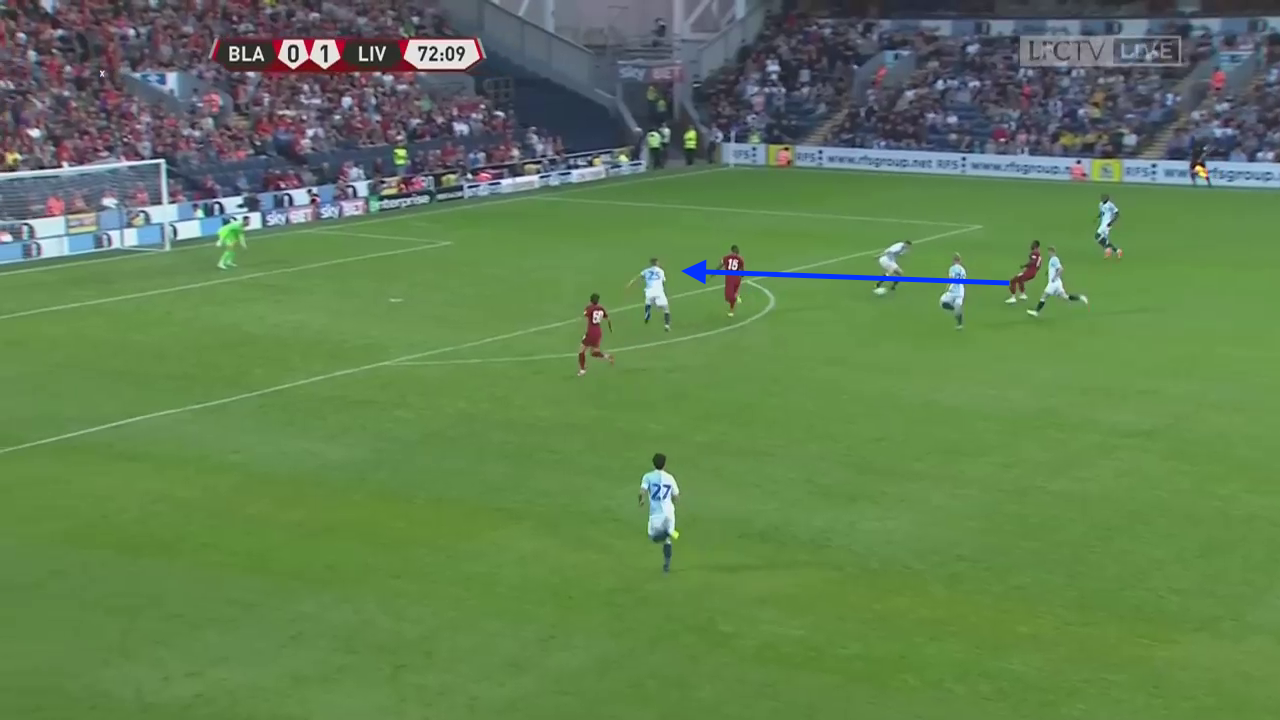 Whilst a lot of people will be focusing on Naby Keita’s stamina and power to add another dynamic to Liverpool’s midfield, Jurgen Klopp should be praised for finding another player who fits his philosophy. Even though it is important to add another weapon to Liverpool’s playing style, it is also important that the player still matches Liverpool’s core philosophies. In Naby Keita, Jurgen Klopp has found someone perfectly suited to his gegenpressing style.

After Liverpool’s Champions League final defeat, many fingers were pointed at Loris Karius’ two mistakes. Concussion aside, Liverpool had rarely looked in control of the game and many had assumed that was because of their defensive frailties. However, it was more due to their lack of control of possession and as a result, control of the game. Naby Keita will enhance that department further, whilst still being able to apply Jurgen Klopp’s gegenpressing style.

Alongside new signing Fabinho and club captain Jordan Henderson, it will allow Liverpool to take control of more games next season. This will be important as they look to mount a title challenge, where controlling games is paramount. Many pundits have highlighted Juventus signing Cristiano Ronaldo as the signing of the season already, but I wouldn’t be surprised to see Naby Keita having the same impact as Ngolo Kante when Chelsea won the league in 2016/17.

Unsung Heroes: These two midfielders slip under the radar at Liverpool...

Why Liverpool won’t sign 35 goal star in the summer transfer...