A major discussion arose in the last few days about Naby Keita and the question that he might be better than Paul Pogba. This question not going to be answered in this piece. It is your choice to decide, but more importantly, this analysis will provide a depth look into Keita’s performance on Monday, when Liverpool visited the Selhurst Park.

As you might know, Liverpool beat Crystal Palace 2-0 and Keita made a strong performance with 3 shots, 1 key pass, 5 tackles and 1 interception, so it is definitely worth a time and energy to put in, in order to get know Keita’s skills and abilities or even his role in the Klopp’s system.

Naby Keita’s career is rapidly rising due to the fact that four years ago, he played FC Istres in Ligue 2 where he was able to bring Gerard Houllier’s attention and joined the Red Bull Salzburg. In 2016, he had reached the next level with signing to Leipzig where played under Hassenhüttl and his pressing system. That can be one of the major reason for Jürgen Klopp for bringing Keita to Liverpool.

Klopp got famous in Dortmund by his counter-pressing system this philosophy appeared in Liverpool, but it requires players with good pressing ability, like Firmino. Klopp’s system relied on congesting the space in order to use the press to get the ball immediately after losing that and then countering the opponent. Keita can contribute to this more than Emre Can did, due to his skill in timing the press and using cover shadow during that. Also, his tactical awareness helps him to press really effectively. In addition, Keita is quite resistant to press due to his ball control skills. He is able to control the ball in tight areas and with his pace, he can progress quickly which also another factor that helpful in Klopp’s philosophy. Consequently, he is able to play almost everywhere in the midfield, but most likely in a #8 or #10 role. He can be utilised widely because of his skills which appear in defensive phase – pressing – and in attacking phase for example shots.

Moreover, Keita could bring some unpredictable element to the game through his great dribbling ability.

As you can see from the teams’ line-ups, Jürgen Klopp uses his usual 4-3-3 formation, where Keita got a position on the left side of the three in midfield. Consequently, his role is to be a box-to-box like Milner. 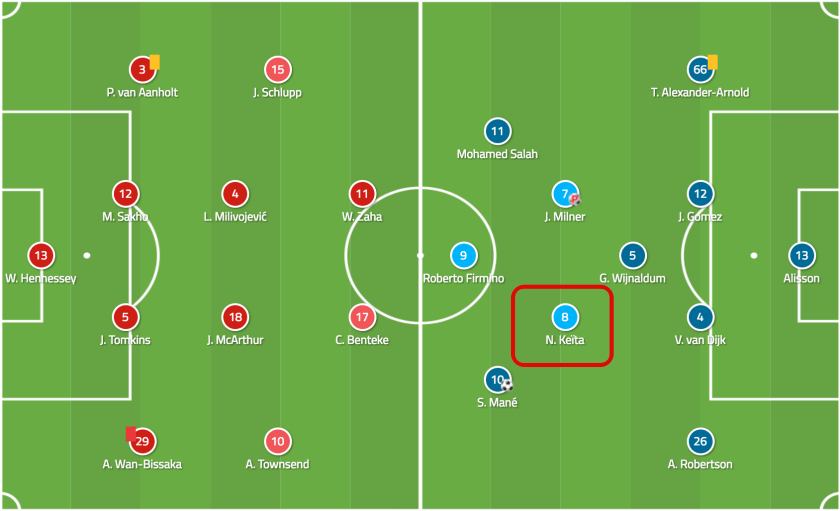 However, started with a centre-oriented manner, thus the position in the #10 space during the first 15 minutes. While he stayed in the centre in order to provide a passing option, but he had been marked tightly by McArthur which means his involvement in the play was nearly zero. 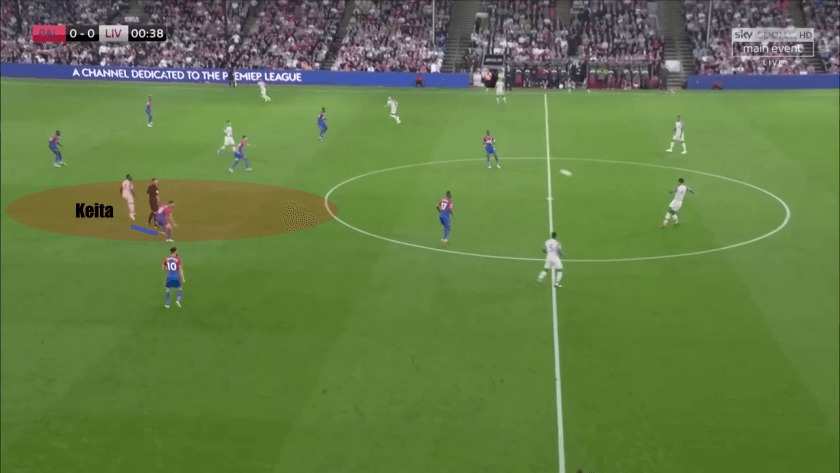 His other duty in this period was to taking Mane’s position when he drifted to the wing. 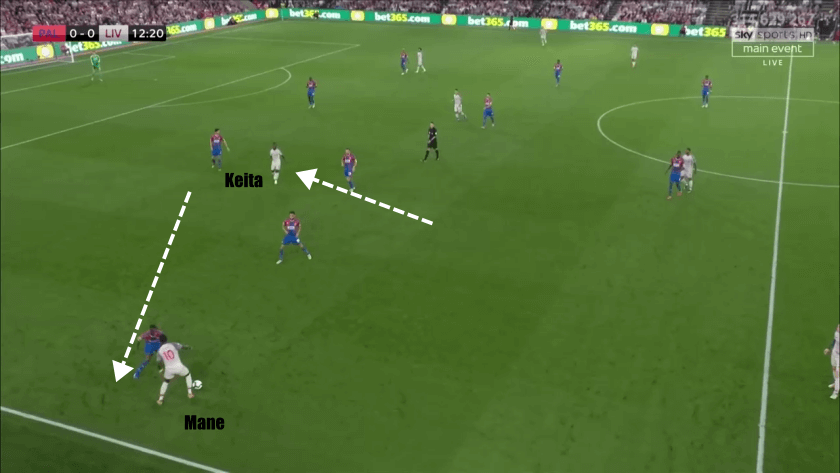 And without the ball, he shifted back to the left half-space, next to Wijnaldum. 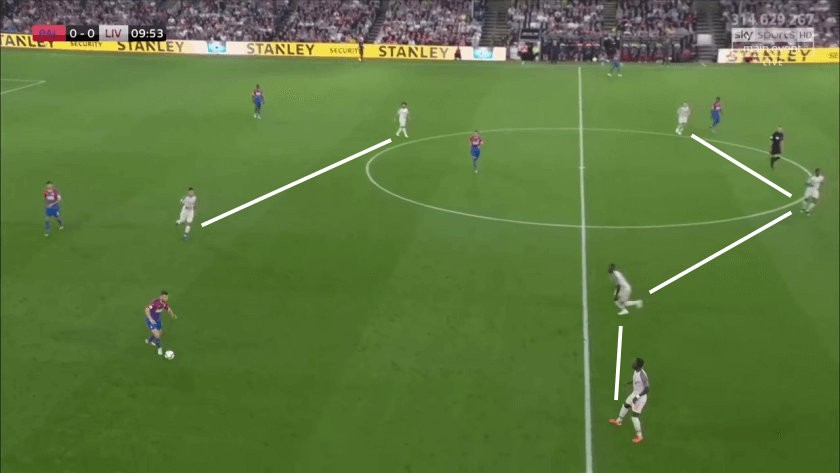 Nevertheless, Liverpool struggled to find space through the Crystal Palace’s massive low block. They formed in two four-man lines in the defensive phase, which did not allow any space for the guests, however, after the 14th-minute, Liverpool started to find a solution to their offensive issue. They find the weak spot in the home side’s formation. Naturally, against the 4-4-2, you might find space in the two sides of the attackers, thus Liverpool used the halfspaces and the wings to attack. This led to a slight modification in Keita’s position, in the rest of the match he acted more in the halfspaces, therefore he met with the ball much more time. 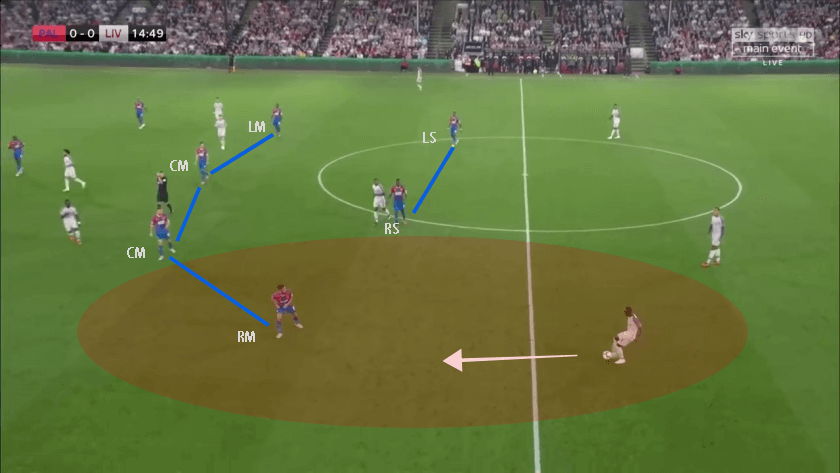 His heat map also proves his change in positioning. 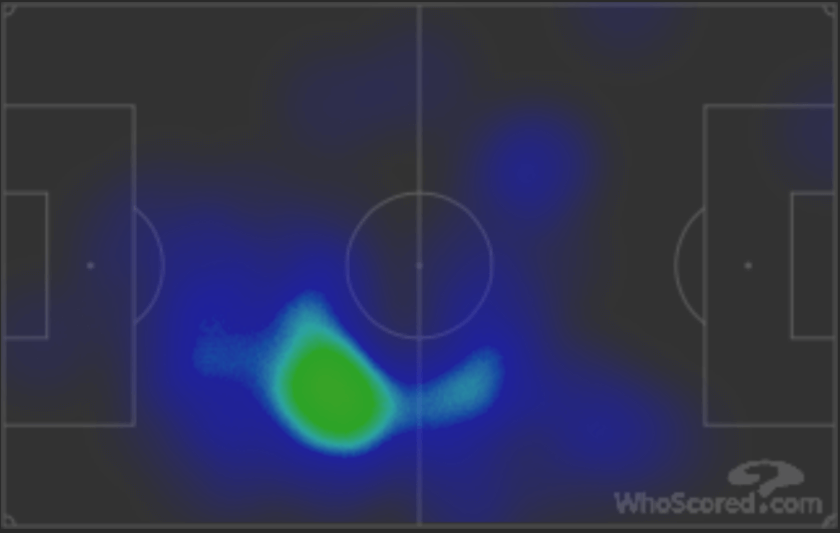 Furthermore, Mane made an excellent job of manipulating the opponent’s position. With Keita dropping to the halfspace McArthur became free, consequently, he tried to maintain a close proximity to Mane, while the centre-back also marked him. Therefore, when Keita got the ball he was able to combine out the onrushing McArthur and before reaching Keita, he passes to Mane. 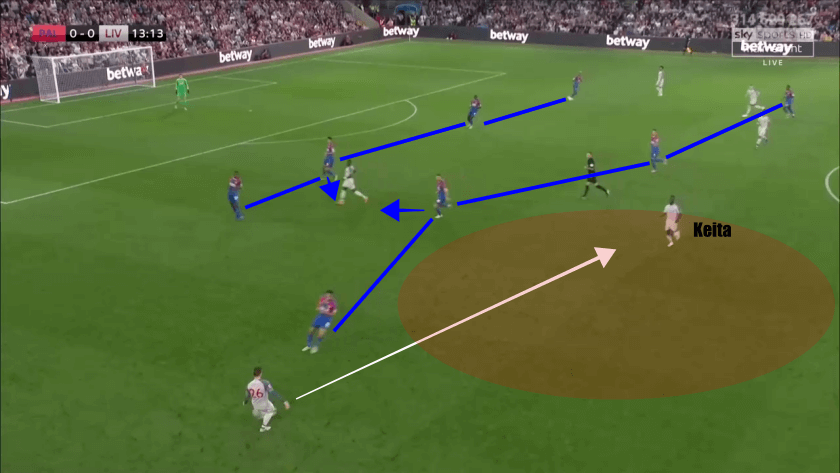 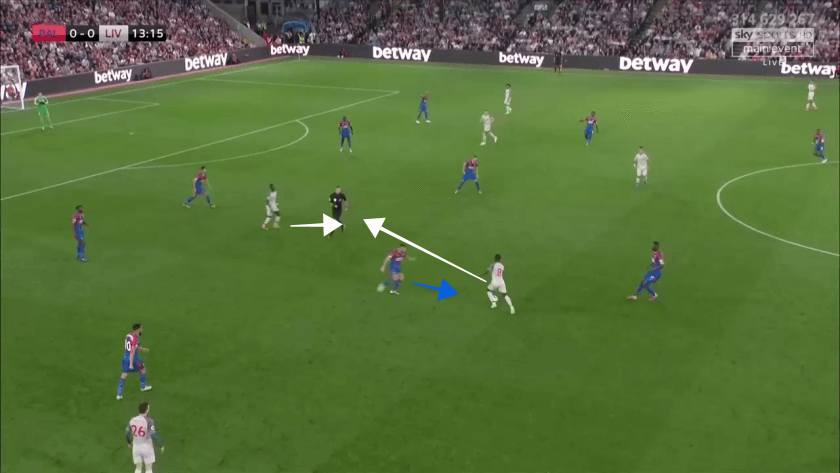 This led to a free space and time for Keita with the ball in the first half. Also, created a numerical superiority for Liverpool in the left halfspace. Robertson and Keita against the Crystal Palace’s right midfielder, Townsend. 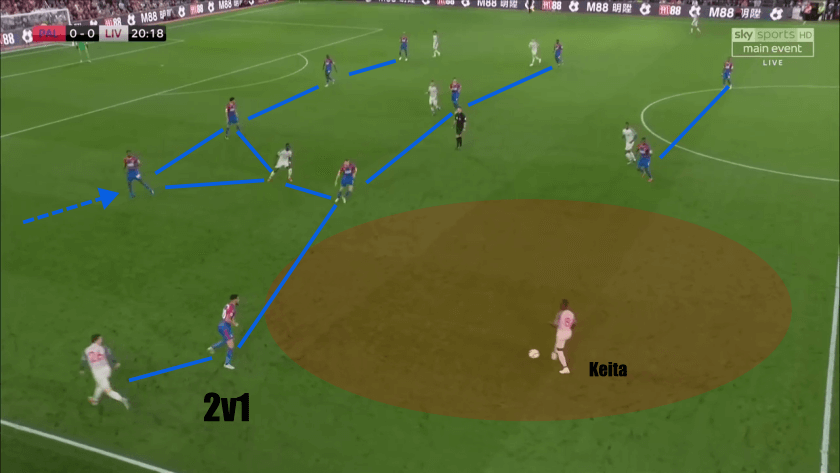 This link-up play between Mane, Robertson and Keita appeared in the pass map that the great 11Tegen11 provided. 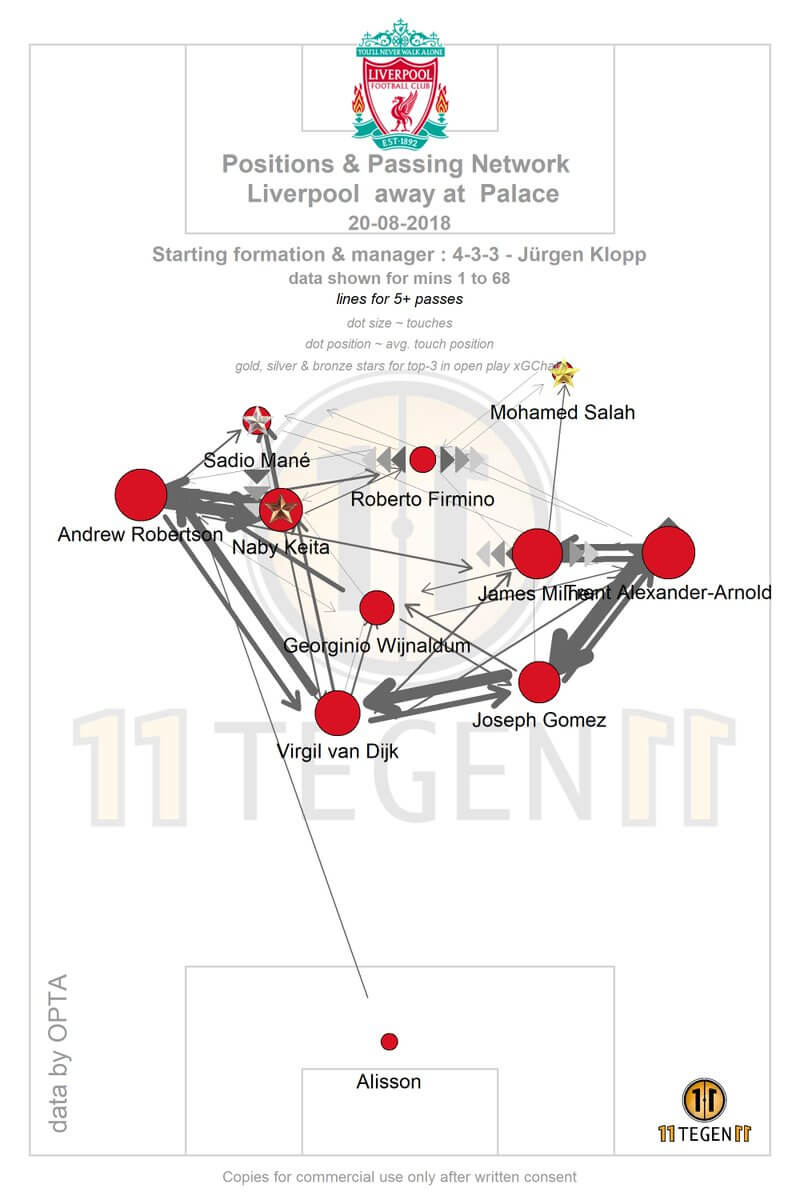 However, Crystal Palace made a tough circumstance for Liverpool which was difficult to break their defence. Especially, Wan-Bissaka in spite of his red card, he made an excellent job against Mane or Robertson. He tackled Mane several times.

Through balls and acting in the final third

There some cases where Keita tried to create chances, this means most of the time passes to Mane. The instance below is where Keita passed to the penalty box, targetting Mane. 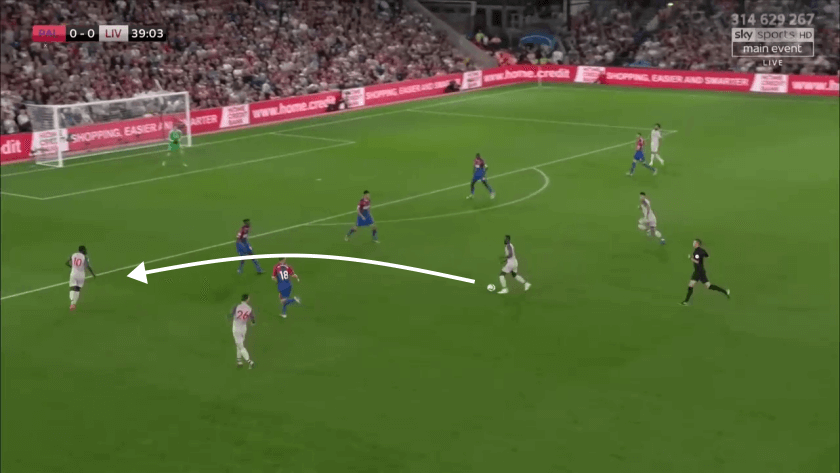 Usually, how quickly the players read the situation is key and Keita showed great ability in this. Like when he realised the opportunity to create a chance for Milner with a through balls behind Crystal’s defence. 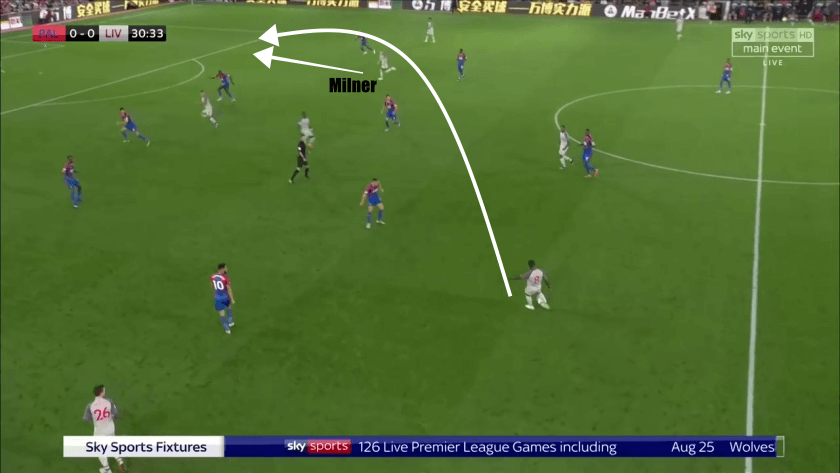 Or another situation where Keita dropped deep to help in the build-up. When he received the ball his marker immediately presses him, but Keita dribbled out and bypassed the opponent. Then he quickly progresses up the field and creates a chance for Salah with a through balls. 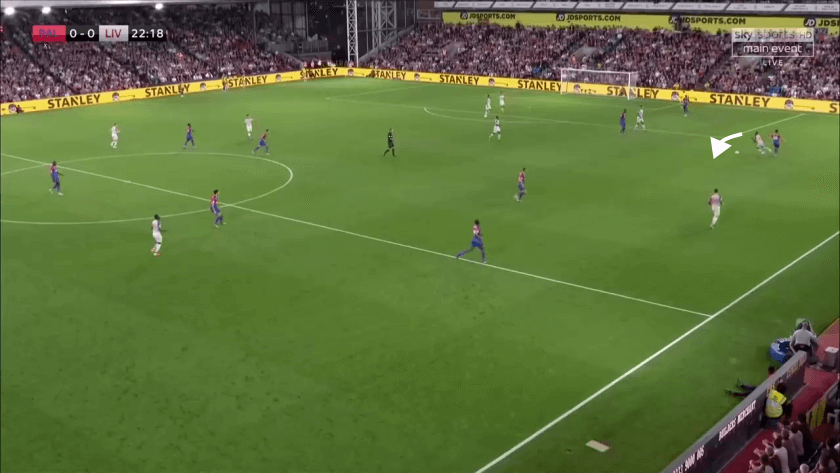 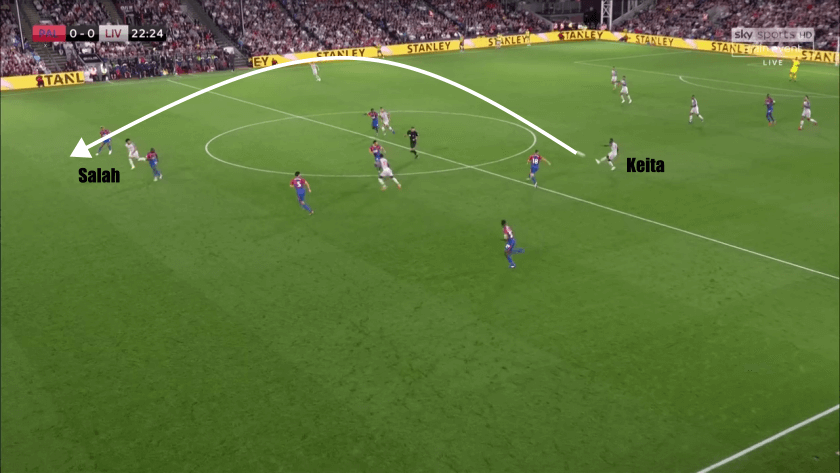 As Jürgen Klopp mentioned after the victory over the Eagles, Keita had a good game, but he can be better. He is still not fit to the squad due to the short time and his natural behaviour, so he needs time to getting comfortable with the team and starting to show his best. He already showed his dribbling ability on one occasion, but he can do more. So, in the end, he can be a huge improvement for Liverpool and for Klopp for this year.

Also, he still 23 years old therefore he is still young and far from the peak of his career, thus he is worth to monitoring his development and career.

Are Liverpool the new set piece specialists in town?

Time for patience: Winter signing will be key for Liverpool in...